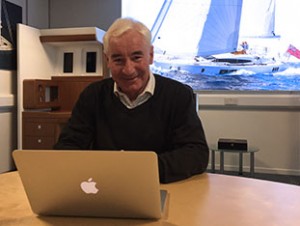 Having been with Gunfleet since 2014 the time has come for Robin to fully enjoy the fruits of his labours after dedicating his whole career life to the yachting industry.

Initially with Berthon International where he was Director for many years before moving to Oyster Marine as Director and heading up the USA office, eventually returning to their UK Head Office in Ipswich for a few years before changing his boat-show shirts for Gunfleet & Hardy under the umbrella of the Windboats Group.

With plans for plenty of time in the garden, a holiday to the Spanish Islands, and no doubt a long list of DIY jobs around the house from Mrs Campbell, we wish Robin all the very best for the future and thank him for his dedicated commitment to the industry throughout his career.

There will be one last chance to see him at the London On Water Show 10-12th May where you will find him on the Gunfleet & Hardy stand.