We received the following quote from Stuart Henty, who was delighted with the re -fit teak deck work that was carried out on Hardy 36 Misty Jack and his quote is below:

“When I first bought the above vessel little did I know that the deck would require a replacement after approximately 18 years. Saying that it wasn’t a noticeable requirement and that at that time it wouldn’t have been top of my shopping list – more impressing upgrades were a priority.

Enough said, upgrades completed and two years on the deck was beginning to show further signs of wear and tear; the caulking between joints was beginning to lift and fall out. At first it was thought that a repair could have been afforded by re-caulking the joints but as further investigations revealed this wasn’t to be that easy. This was most prominent on the lower ring deck. The flybridge and aft deck still had a few years left before attention being required.

The root cause for the amount of wear & tear for the past 18 years cannot be easily identified. It can only be assumed that this was due to the possibility of sanding, high pressure jetting, deck brushes being too aggressive, etc. who knows. This may provoke a response from previous owners & other users alike.

It was decided that 2016 was the year to investigate, rectify & repair the damaged areas, at least 75% – replacement had not been an option I had even contemplated. At first I contacted Hardy Marine as I had found them to be most useful for after sales service and the fitting of three Plastimo Cool n Dry Dorade vents to the foredeck roof.

My contact as in the past was David Bull, Quality Manager (with additional support from Oliver James, MD) David visited MJ and went away to devise a plan after doing some research. The plan and news was not what I wanted to hear at least not initially. David had identified that the thickness of the teak had worn sufficiently to prevent re-caulking. To conclude the only option was to renew / replace the decking – “Give me a quote” was my reaction.

The wait was agonising (what was the alternatives – none that I could see – to do nothing wasn’t an option) although I wasn’t in any hurry to receive the quotation; £ note signs clouded my vision. Despite the quotation being a bit of a shock to the system, there was the comfort of knowing that the work would be completed by experts, and that the teak suppliers/manufacturers had retained the original patterns so production wouldn’t be a problem. My only concern was the duration to undertake the work and leisure downtime.

Do I go ahead? After careful consideration; cost against benefit, etc. the decision to proceed was made near the end of the year so the family could get full use of the boat until then. This entailed the lifting out and placement of vessel in a safe and clean environment – Windboats Marine (Hardy’s mother company) at Wroxham, Norfolk. Removal of old teak from the GRP structure, including the removal of all deck fittings; preparation of GRP decking to accept adhesive and deck fittings but not before cut & polishing of the superstructure; lastly the teak replacement although several access hatches had to be cut from inside to gain access to deck fillers, etc.

The costs – although some may consider the figure to be excessive it was considered to be an investment, the initial decking had lasted 18 years and if maintained properly would take us into mid 2030’s at least. Apart from enhancing the beauty of the 36 it would maintain its value and beyond – at least my two sons would reap the benefit. It is intended to retain the boat long term.

After agreeing a start date with David all that remained was to move the boat to Windboats.

The boat lifted and transported to the confines of Windboats, it was farewell to the boat for the agreed four weeks works duration. During the 4 week period both David & I kept in touch, emails, phone calls some with supportive progress images especially when issues arose. Issues were few and far between, i.e. unforeseen access panels, damaged / broken deck fittings, supplementary refitting of two scuppers – an unusual add-on for clearing deck of low lying water and a couple of canvas buttons.

The expected phone call to inform me that the works had been completed had arrived, it was time to view the completed works.

On a very cold and frosty morning I visited Wroxham to view the finished article. It was better than I had anticipated, I could not find any defects and I haven’t found any yet. David Bull gave his word that any defects as a result of the works would be attended to as if under warranty.

What lovely boats these Hardy Commodores are – a typical Classic. Look after them and they will last a life time. It has therefore been suggested to clean the deck purely by lightly brushing with a running hose.

From my point of view it’s a big thanks to the team at Hardy (Windboats) who worked on Misty Jack in addition to David Bull and Oliver James for a terrific job. Just waiting for my 20 year warranty.” 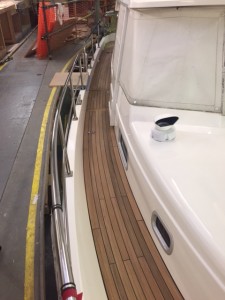