Warning: "continue" targeting switch is equivalent to "break". Did you mean to use "continue 2"? in /data03/hardy/public_html/wp-content/plugins/types/vendor/toolset/types/embedded/includes/wpml.php on line 646

Warning: "continue" targeting switch is equivalent to "break". Did you mean to use "continue 2"? in /data03/hardy/public_html/wp-content/plugins/types/vendor/toolset/types/embedded/includes/wpml.php on line 663
 Hardy 65 – Hardy Marine 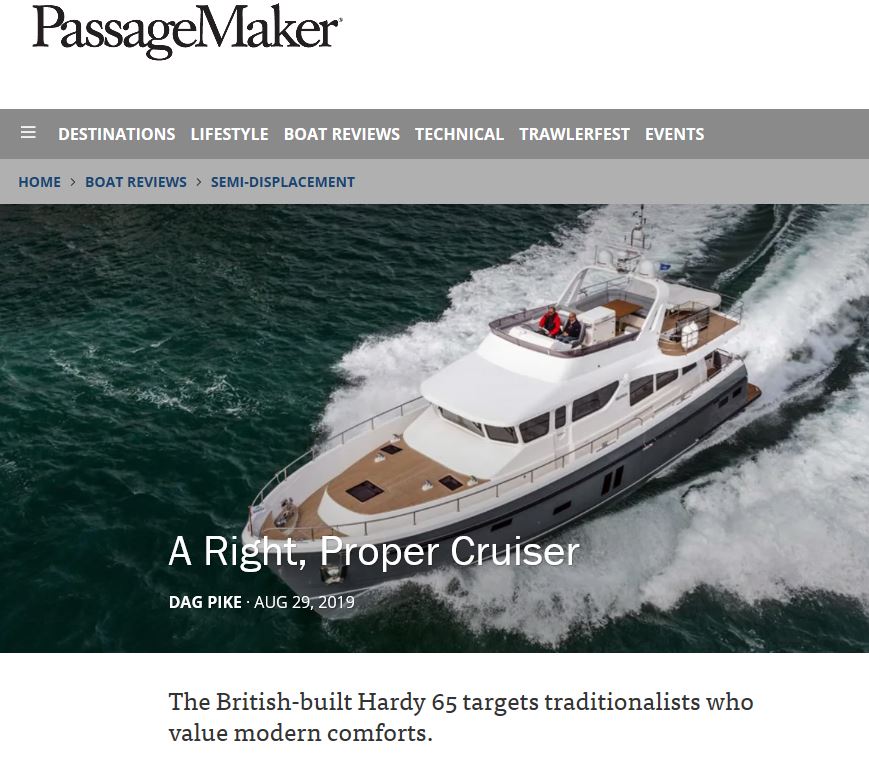 Read the latest review on the Hardy 65 by US magazine ‘Passagemaker’, click the link below: 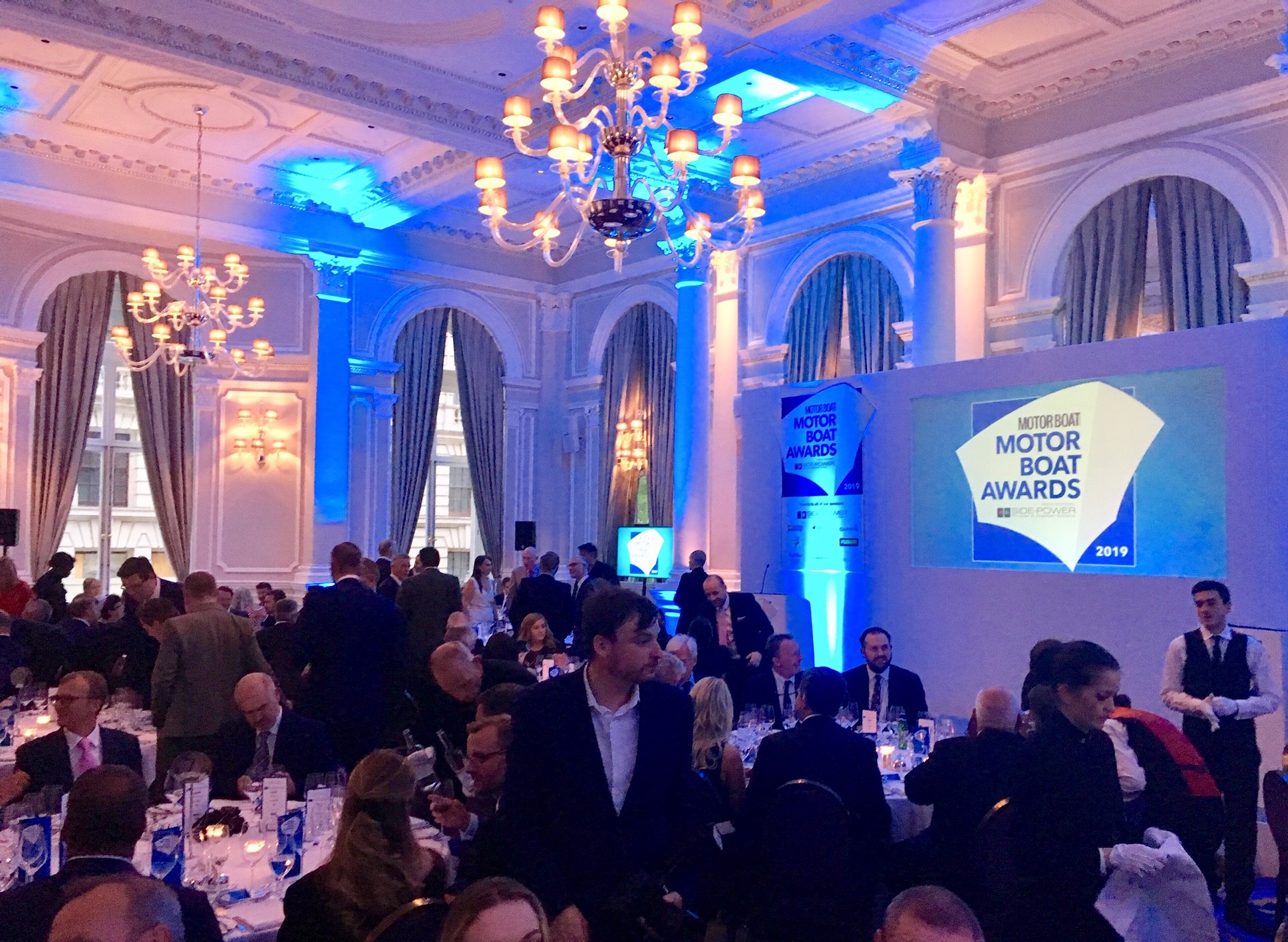 WHAT A NIGHT!!  We are proud to announce that the Hardy 65 won Best Passage-Maker at the 2019 Motor Boat & Yachting Awards ceremony last night, held at the prestigious Corinthia Hotel in London.

Oliver James, MD of the Windboats Group, who own and build the Hardy range of Motor Yachts received the award along with our Commercial & Projects Manager Nick Creed who oversaw the 18 month project, and Head of Sales & Marketing Julian Weatherill.

After the presentation Oliver James said to Elaine Bunting of TI Media (Group Editor for MBY) that he was “delighted that the Hardy 65 has received recognition for excellent passage making, the Hardy strapline is ‘Designed for Comfort, Built for the Sea’ – this ethos lies at the heart of everything we build. The Hardy name has become synonymous with quality, comfort, strength, experience and excellent sea-keeping”.

The judges came to their decision after the impressive test report carried out by MBY in February 2018 during the dramatic winter storm nicknamed The Beast from the East, which is also an appropriate nickname for the Hardy 65!  They experienced F7 winds in the English Channel after clearing the snow from the decks before setting of from Portsmouth Harbour.  The MBY video can be viewed at https://www.mby.com/videos/new-boats/video-24-hours-hardy-65

The MBY Awards Presentation said the Hardy 65 is ‘Tough and uncompromising, yet has an interior with style and panache, it is a true Passage-Maker!’ – great praise indeed, which a large part must go to the owners of boat who’s vision for a luxurious explorer yacht helped create this incredible vessel. 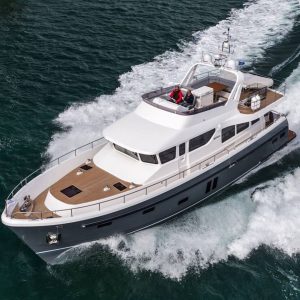 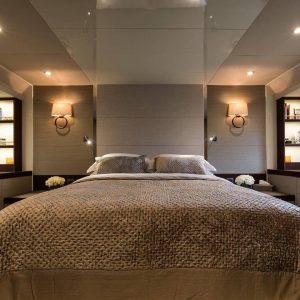 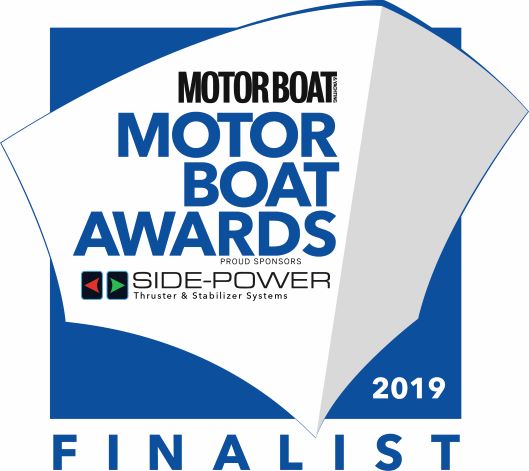 We look forward to attending the Motor Boat & Yachting 2019 Motor Boat of the Year Awards where we have made it through to their shortlist of finalists with the Hardy 65 in the category Best Passagemaker sponsored by NautiBuoy Marine.

The awards ceremony will take place at the Corinthia Hotel in London on the evening of the 7th May, just prior to the London Yacht Show in St. Katharine Docks 8-12 May. 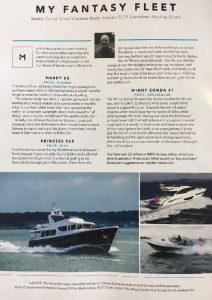 Fun article in the November 18 issue of Motor Boat & Yachting – which Hardy would you have in your Fantasy Fleet?

It was great to prove what Hardy’s are built to do!  What a test for the Hardy 65, as expected she took it in her stride.

Those who visited the Southampton Boat Show would have seen the wonderful Hardy 65/02 MARESIA, with her purposeful  Hardy traditional exterior and exquisite designer interior that seems to wow all who step aboard.

One of those visitors was Jack Haines of Motorboat and Yachting who, after and extensive tour asked if we could accommodate an extended boat test. As it happened, MARESIA was due back in Ipswich for a few extra bits and pieces and, after some starts and stops on planning, it was agreed to use the delivery trip back to MARESIA’S home port of Jersey, to carry out their test.

As we all know, the cold weather has been quite extensive so eventually we thought we found a window for both weather and everyone’s availability around the Monday 19th March. The plan was to meet the MBY team in Gosport on the Sunday night for a crossing on the Monday.

As these things often go, the weather was not looking that great, so we set of from Ipswich on Friday 17th with the idea of clearing the North Sea and Kent coast where the forecast was for F7s and 8s building from the north. We’d then have an easier leg along the south coast to Gosport.

Crossing the Thames estuary at around 18:00 in calm seas, the latest forecast was telling us of F7s, 8s occasional 9s and snow, imminent! Ooooh! Our initial thoughts were to look at Ramsgate or Dover, but upon checking out the detailed weather maps we could see ourselves getting stuck for days if we stopped, but, if we pushed on overnight, we’d  probably stay ahead of all the nasty stuff before arriving in Gosport. The decision was made, throttles down and Portsmouth Harbour bound.  It was the right decision. The seas were generally calm and winds about 17-20 knots. 2300rpm and 21-22knots boat speed. We arrived at Gosport Premier Marina at 02.30. With our berth pre-booked we tied up just as the strong and very cold winds came in. Phew!

Our MBY guests were not due until Sunday night, so Saturday and Sunday was spent watching the weather get worse with ever stronger and cold winds. Waking up on Sunday was amazing, a white marina and about 6” of snow everywhere. It going to be an interesting test!!

Jack and photographer Richard arrived late Sunday to a forecast mid channel of F7s and 8s with 3.5m seas and wind gusts on the other side (Channel Islands) possibly over 50 knots. Was it correct to continue we asked ourselves? For sure this is what Hardys are all about,  but the purpose of the exercise was to show MBY how she performs and handles in as wide a spectrum of situations as possible. In such extreme conditions aerial photography with a drone would be out of the question and in seamanship terms, why risk a cross-channel passage with such a bad forecast. All sensible and valid reasons to change the plan.

So it was decided that, with the northerly strong winds forecast, the Solent would give us plenty of sea-action and, if dropped off on the end of Yarmouth Pier, Richard might be able to launch his drone and/or we could get some wonderful full-chat fly-pasts of MARESIA doing, what she does best.

We nosed out of Gosport at about 09.30 on Monday to brilliant sunshine and flat calm seas. ”Oh fiddle sticks” we said (or words to that effect) “we need more wind and waves than this”. After another quick look at the weather maps and forecasts we decided to run down the back (south-side) of the Isle of Wight where the wind would fill in and the seas build from the east. Well, we were not wrong! We found 3m seas, very short and dead behind us. Wind around28-33knots. With the engines at about 1950 rpm and we were surfing into the back of the waves ahead of us and touching 26knots.

We certainly found the ‘testing’ conditions we were looking for. She was on autopilot and not once did we feel any loss of control. It was amazing. In fact, sitting inside with the heating on it felt like a mildly choppy day cruising at about 16knots. Not sure what the coastguards thought of us, but we and MARESIA were in our element. I had my slippers on!!

We rounded the Needles just after lunch and heading up wind through the Hurst Narrows for Yarmouth. It was pretty lumpy off the Dolphin Bank but the Hardy 65’s flared bow just cut through it all and sent the ‘big greenies’ flying aft over the top.

We arrived in Yarmouth with the idea of dropping off the photographer, but Yarmouth in a northerly is not great. We nosed our way in but all the landing pontoons were across the wind, so the prospect of having to try and get off (twice) with 33-38knots holding us onto the pontoons, led us to abandon the idea. With a very tight spin-on-a-sixpence right inside Yarmouth we got out of there and headed for Poole.

Once in Poole Harbour the wind eased a bit and with Richard on the breakwater just outside Poole Yacht Club Marina at Hamworthy, he was able to launch the drone. We’ve not seen them yet, but the fly-past shots should be quite dramatic!

All in all we all agreed it was a great test with some great action shots. Yes it would have been nice to get to Guernsey, but at least our friends from MBY experienced a night on board and a whole bunch of varied conditions.

Tuesday’s forecast was less severe with 25-30knots of wind and 2.5m seas from astern. Fresh from the experiences round the back of the Island, we set off to Guernsey to reunite MARESIA with her owners and thence back home to Jersey.

All was great until about 10 miles before the Alderney Race where those pesky 3m+ seas popped up again and the wind increased to about 35knots. The seas of course were a little confused, but yet again the Hardy 65 just took it all in her stride. The tide and seas were with us through the Race.so it was reasonably flat with a long swell – MARESIA was obviously keen to get home because yet again we saw her surfing at 23-24knots.

We arrived in St Peter Port circa 15.00 (a 6hr crossing) in bright sunshine. A quick wash down and she’s ready for her owners’ arrival in the morning. Guernsey to Jersey was a breeze, flat calm, cruising gently at 17knots with a beaming smile from MARESIA’S owner. A lovely end to a very interesting test and delivery home.

We understand that there will be video footage on the MBY website presently, with the written report published soon. 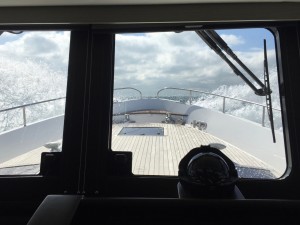