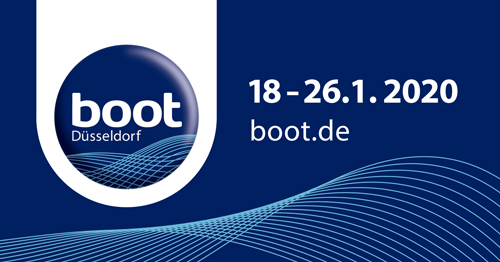 Hardy will not be exhibiting at Boot Düsseldorf this year, however our team will be attending on 23rd and 24th January and would be only too happy to meet with you to discuss the Hardy range and answer any questions you may have.  If you would like to arrange a meeting on either of these days then please email enquiries@hardymarine.co.uk 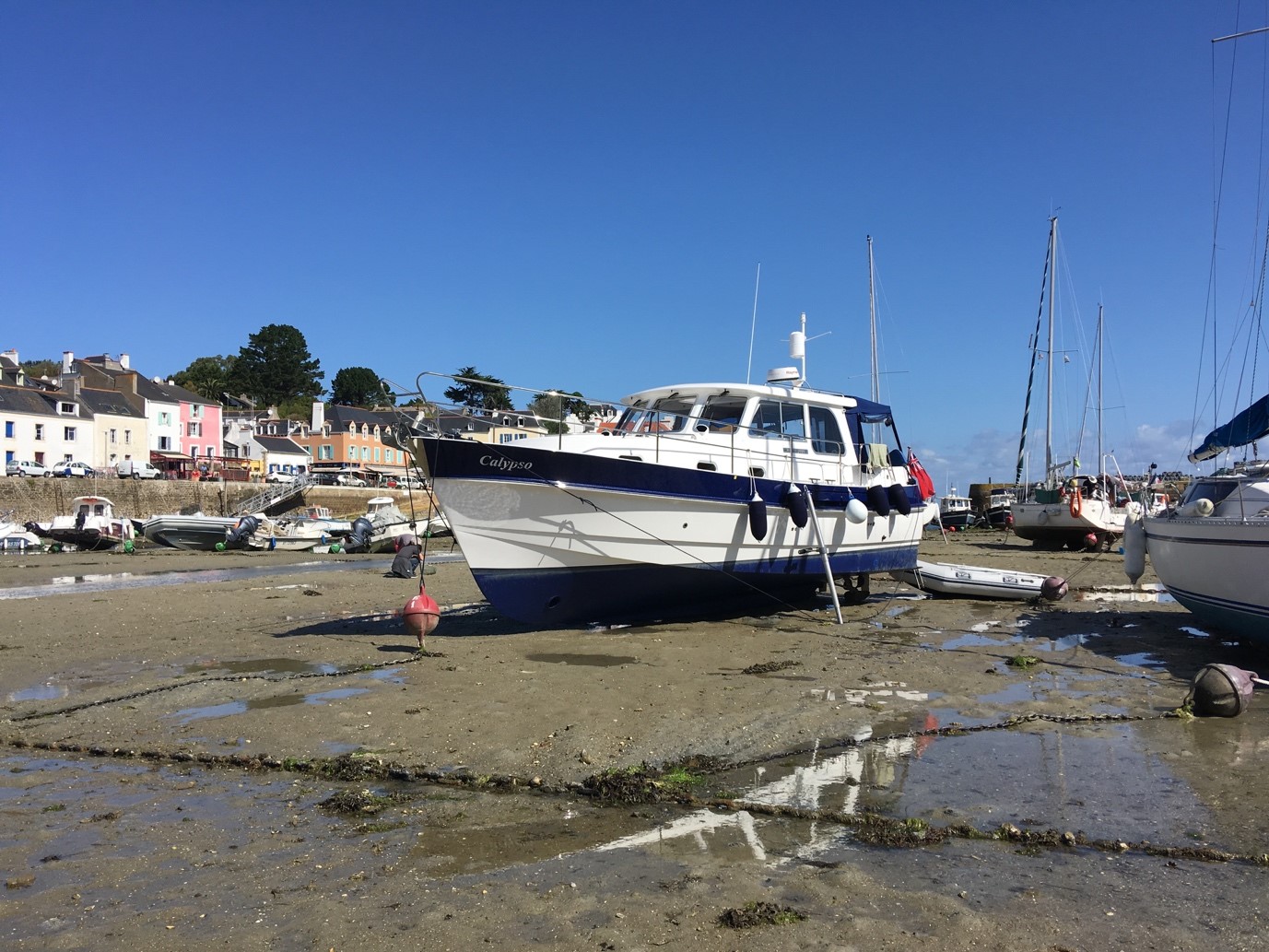 “Agreed” – we would have to leave Gosport the very next day, August 22nd, if we were to get Calypso to her berth in Brittany before the end of the summer 2019. Otherwise, she would have to stay in Gosport Marina until the spring of 2020 – which would be a pity, because she was ready to go and the forecast was good, even if we were both rather nervous about the voyage.

Calypso was our new Hardy 32DS which we had contracted to buy at the 2018 Southampton Boat Show.  My wife, Jane, and I were newcomers to motor cruisers, having sailed cruising yachts for some 25 years, out of Chichester, Gosport, Guernsey and various places in North and South Brittany. We had reached the age when sailing two up in a largish yacht – our last was an Ovni 395 – was beginning to seem like hard work.

Before taking the plunge and signing up for a Hardy, we had researched a variety of makes, always returning to the traditional motor cruisers, rather than going for a ‘gin palace’ – which would have caused great hilarity amongst our yachting friends. Eventually what really attracted us to choosing a Hardy 32DS was, not only the quality and seaworthiness, but also the fact that it is possible to take the ground – because the propeller shaft does not project below the line of the keel.  Having kept our previous sailing boat, which had a lifting keel, in South Brittany and having experienced the advantages of being able to dry out on the many sandy beaches and harbours exposed by the large tides there, we were keen to maintain the ability to do so.

So much for the rationale behind our choice. When we explained to Oliver James and Julian Wetherill that we wanted ‘legs’ for our new boat, they politely expressed a little surprise. We gathered that it was quite an unusual requirement, but neither turned a hair.  In fact, throughout the build process, all our requests were met with a ‘can do’ polite acceptance – even when I produced a new pencil design for the galley layout on a piece of cardboard!

During the build process we had visited North Walsham every month to see how Calypso was coming on and we both greatly enjoyed the interest and excitement of these visits.  It was on the last visit before commissioning that we were shown the telescopic aluminium ‘legs’ and how they fitted and were secured into sockets near the centre of the hull just below the gunwale.  They were then braced with slightly tensioned lines running fore and aft to the fore and aft cleats.  Simple really.

We took possession of Calypso in Fox’s Marina on the Orwell.  Now that she was afloat, we asked for another demonstration of how the legs were fitted. They were taken out of the lazarette and extracted from their smart blue canvas bag – a bit like a medium-sized bag of golf clubs.  Given that it did not take long to put one of the ‘legs’ into position, we felt fairly confident that we would indeed be able to fit them ourselves.

Six weeks later in August 2019, Calypso was ready for our voyage across the Channel. We had had some training in handling her, but still felt like complete novices. We had delayed our departure to have a Fischer Panda 4000 generator retrofitted.  With this, we could fully utilise our ‘all-singing, all-dancing’ electric oven and microwave, and could also avoid being dependent on shore power to sustain our batteries.

So, with a good long-term weather forecast, we took the plunge and left Gosport.  We crossed to Guernsey, then over to Tréguier on the Brittany coast, on to Roscoff, then to L’AberBenoit, St Evette, Benodet, Port Manech and finally, to our ultimate goal, Sauzon, on Belle Ile, all in the space of just over a week. What a difference it makes to have big engines – such a timetable would have been unimaginable in our sailing days.

Having visited Sauzon on numerous occasions in our yacht, we knew it was an ideal place to try out our new ‘legs’.  It is well sheltered and has an inner port that dries completely so that you can walk ashore.  The sandy bottom is clear of rocks and the harbour staff are usually good at helping boats pick up the required fore and aft moorings, which prevent them swinging in the huge tides.

We had entered the inner port at about 16.30 and Low Water was due at about 01.00 at night. After a cuppa we extracted the blue canvas bag from the lazarette, extended the legs to the required (and previously marked) length and fitted them to each side of Calypso.  It was pretty straightforward, although we were glad we had had the second lesson in Fox’s on how to do it.  By the time we finished our supper the tide was starting to fall quite fast and we could see the sandy bottom, but the ‘feet’ on the end of the ‘legs’ were still not touching the sand.  It is worth saying that the legs do not have to take the full weight of the boat – that is taken by the keel. They simply support the boat upright so that it does not fall to one side or the other.

Having left Port Manech at 08.00 and travelled some 50-60 miles we were feeling quite tired.  Question 1 – ‘should we try to stay awake to check how the legs performed?’  Question 2 – ‘what could we possibly do if the legs did not do their job?’ The answer to this last had to be ‘Very little’.

So we retired to our cabin and I went soundly to sleep and did not wake until my usual time in the morning.  For me, not a bump, crunch or creak did I hear from the hull as Calypso took the ground.  Jane tried to stay awake until Calypso had settled, but it was a very gentle process and she too eventually fell asleep.

The next morning, we realised, with some pride, that we and Calypso had survived the night, and we were, of course, afloat again.  Since it would be Low Water at about 14.00, this time we could watch how she took the ground – again, ‘pas de problème.’

Having gone ashore in the dinghy for bread and croissants from the marvellous boulangerie, we spent a relaxed few hours waiting for the tide to go out.  When it had, many of the locals walked into the harbour with baskets, small rakes, trowels, packets of salt and bottles of water – to harvest the coquillage hiding in the sand…. But that is another story.

Meanwhile, Calypso is now happily learning French in her home berth in Port La Forêt, near Concarneau.  We are thrilled with our Hardy 32DS and especially so now that we have successfully taken the ground in one of our favourite places.  We are looking forward with great excitement to visiting old haunts and exciting new places in the coming season. 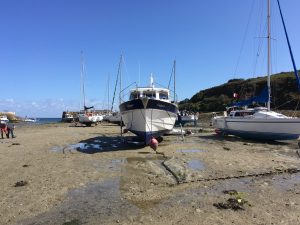